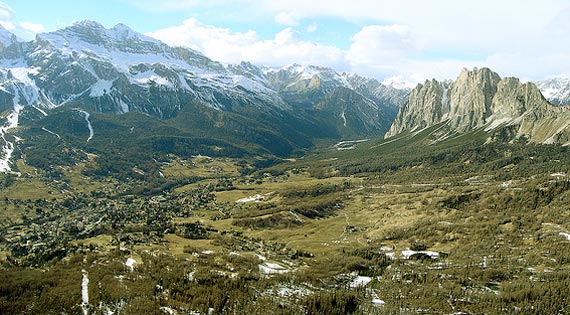 In the middle of Dolomiti, the most famous location wher you can spend your winter holidays is the famous city of Cortina D’ Ampezzo. This town was built for the first time in Middle Age.

During the centuries, Cortina was always the scenario of many battles, like the famous Battaglia della Lega Cambrai (Lega Cambrai’s battle), between Venice and an hostile coalition organized by the Pope of Rome.

In spite of that, Cortina became really popular only during the past century.In particular, thanks to the Olympic Games that took place there, on 1956. From that year, Cortina become a sort of “status-symbol” for the wealthy classes living into the northern part of Italy.

Cortina is the best destination for a luxury vacation ; but, if you want to plan a low budget trip, is better start looking for something else. Even if accomodations can be found also for a cheap price, side expenses like food, drinks and skipass are really expensive. The only solution for a medium budget trip, in particular if you are a small group, consist of renting an house. But you have to start searching for it at least two months before the date of your arrival.

Even if really expensive, Cortina has a lot to offer. Skiing tracks and landscapes are probably the best of the entire Dolomiti area. Also the skiing school of Cortina has a long tradition : it was established on 1906.

Finally we have to spend some words regarding the food you can find in Cortina. In addition to the traditional courses of the Dolomiti (Fonduta, Kraffen etc.), in Cortina you can find many creative courses specific from the area.

The best way to reach Cortina is by car. The town is just one hour away from Belluno. If you want, you can also reach Cortina with train. From Belluno station there are about 10 busses going to and from Cortina every day.