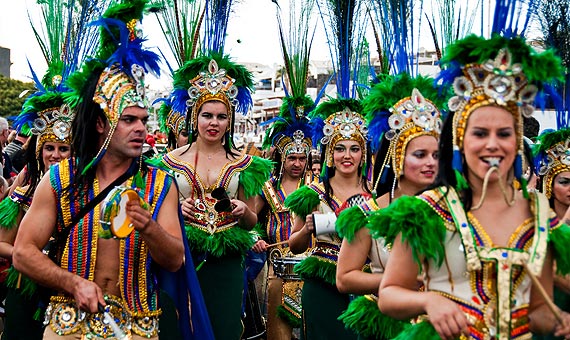 Carnival is in the air and we want to show you a different kind of holyday that combines carnival and sea. Where? In the Canary Islands, Tenerife and Gran Canaria every year carnival is a very important event as picturesque and representative of the spirit and traditions of the Canario people.

Every year there are events, exhibitions, concerts and parties, linked in a double way with local traditions and the stereotype of Brazilian parades. In the whole Canary Islands archipelago each edition  is organized by the Canaria Carnival Community, so that the events are programmed also in the other “minor” islands as Lanzarote, Fuerteventura, La Palma, El Hierro and La Gomera.

Participants come from abroad as well from continental Spain to Tenerife, where the main carnival is in Santa Cruz de Tenerife (La Capital) and Puerto de la Cruz. In Gran Canaria main celebrations take place in the cities of Las Palmas and Maspalomas, where there are Drag Queen’s shows as, notoriously, the carnival here hosts several events designed and dedicated to the gay world. This carnival is very among the international gay community, it is also often an expression of extravagance, art, as well as an opportunity to transform itself into a real laboratory for new fashions and trends.

But there are not only gays, in Santa Cruz de Tenerife ad Las Palmas de Gran Canaria, carnival is a real explosion of freedom, love, sex and exciting atmospheres. Taking advantages of the low rates for hotels and flight, you shall easily find a lastminute solution to spend an extraordinary vacaion in the Canary islands, where summer is always shining.

The carnival of Tenerife is well known and often compared to the most famous of Rio de Janeiro. For the 2010 events include initiatives and celebrations from 22 January to 21 February. There are floats parades, folk dancers, schools of samba and salsa, music concerts and exhibitions from locals and South Americans representatives.

The main appointment will be on February 12 with the election of the Queen of the Carnival and the traditional ride. The Carnival will end on February 21 with The Entierro de la Sardina, a fake fish is covered with sand, symbolizing the final point of the celebrations. In Puerto de la Cruz, the old capital at the foot of Teide vulcano, Carnival celebrations, that are called “Fiesta del invierno,” will begin February 7 and will be held until the 20th of that month.

In my opinion Tenerife is the island that has more resources in the whole archipelago. Wild nature, mountains, the southern part with hot and dry temperatures and the North with its rich vegetation and good climate conditions. In February temperatures move in a range from 18° to 26°.