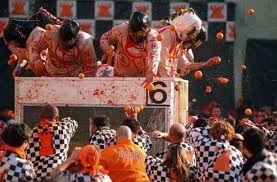 There are several main characters, such as the miller’s daughter, the Mugnaia in Italian, having the General at her side. They have to guarantee the correct proceedings of the Carnival.

You will also be able to meet the Napoleonic General Staff, with both officers and Vivandieres, and the historic personalities like the garantor of the city’s freedom, and the Assistant Grand Chancellor.

The Carnival recalls a true historical episode related to the city: the insurrection of people against tyranny. A real civil war started the day after the miller’s daughter murdered the hated tyrant Raineri di Biandrate. People turned against the Napoleonic troop, and used arrows to defend themselves.

During the parade, you will be able to see how the rebellion culminated in the parade of the court and in the battle, which is transformed during the event in the famous Battle of the Oranges.

Instead of the arrows, you will see people throwing oranges: the one on foot, the so-called aranceri are divided in squads and represent the people, while the one on the carts represent the Napoleonic troops.

Oranges give some colors and perfumes to the city, letting anyone to give his own contribute by throwing the fruit.

In the meantime, along the streets of the city the miller’s daughter and her followers give candies, sweets and small presents to spectators which come from all over Europe to enjoy this spectacular event.

Be sure not to miss it!