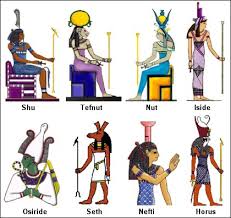 While visiting the Egyptian Museum, you will find so many Gods and Goddesses, and you will ask yourself why there are so many of them and what they are related to.

Ancient Egyptians believed in several magical practises, myths and stories, each of them related to a specific God or Goddes. All of them are important, even if it could be hard to believe for us.

In this post you will be able to learn the most famous ones, such as the ones you are able to see the most in the museum. The same one you can read about on history books and travel guides.

Anubis, for example, is the God of cemeteries. He is depicted as a man with the head of a dog. At the beginning people thought it was a jackal, but it is not. His full body and head are black, due to the fact that, after mummification, the corpse got discolured because of the treatment it got. Anubis is also the symbol of a second and new life and richness.

Isis is the mother Goddess, so she is also the symbolic mother of the king. She is both the sister and wife of Osiris and she has a very strong magical power that she uses to bring Osiris to life and to protect their son Horus. Due to this reason, she is associated to the protection and assistance of the children. She appears as a woman wearing a throne or a sun disc flanked with cow’s horns on her head. She can also be seen as a kite, mourning the dead.

Osiris, Isis’s brother and husband and Horus’s father, is the God of both underworld and fertility. He appears wrapped inside a mummy, holding a crook and a flail. Most of time he wears a conical headdress which includes a tall plume and some ram’s horns.